CLEAR conducted a systematic literature search and identified, reviewed, and determined causal evidence ratings for research on interventions that use behavioral finance insights to influence individuals’ retirement savings. This brief presents three major gaps this systematic review identified in the literature. A companion brief presents key findings from the review.

Please see the About CLEAR section for more information on CLEAR policies and procedures.

What is behavioral finance?

In business and government, policies often are developed based on the core assumptions of economic theory: that people carefully consider all alternatives before making a decision, choose the optimal action, follow through on their intentions, and consistently respond to incentives. In the real world, however, people do not always follow these rules. The study of the gap between how people actually behave and how they are predicted to behave based on economic theory is commonly referred to as behavioral economics. When applied to topics in finance, such as investment and saving, it is referred to as behavioral finance. Many studies in behavioral finance explore how individuals’ choices about saving for retirement deviate from the behavior predicted by economic theory. Other topics include loss aversion and market bubbles. 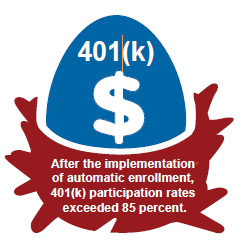 CLEAR reviewed 11 studies which used interrupted time series designs to examine the relationship between changes in default options and retirement savings behavior. The most common intervention studied was the introduction of automatic 401(k) enrollment. Typically, individuals must actively decide to enroll in their company’s 401(k) plan, specifying the amount of money they will invest each pay period and to which investment funds this money should be allocated. Under automatic enrollment, individuals are enrolled into a retirement plan with pre-specified parameters without having to take any action or make any decisions, unless they opt out or request to change the details of their investments.

Most of the studies CLEAR reviewed found that defaults are associated with large changes in investment behavior. For example, Choi, et al. (2004) examined changes in 401(k) participation rates at three companies. Prior to automatic enrollment, 401(k) participation rates after six months of employment ranged from 26 to 43 percent at the three firms. After the implementation of automatic enrollment, participation rates exceeded 85 percent. In another example, Thaler and Benartzi (2004) found that Save More TommorowTM, a savings plan which automatically increased employee 401(k) contribution rates whenever an enrolled employee’s salary increased, led to a more than doubling of the average savings rate at one company. When taken together, the body of research suggests that defaults can affect investment behavior.

But no study produces strong causal evidence on the impacts of defaults on its own.

Although the body of evidence suggests that defaults can have causal effects on behavior, none of the individual studies using interrupted time series designs that CLEAR reviewed demonstrated high or moderate causal evidence. A concern in many of these studies is that market trends or employee demand may have influenced the companies’ decisions to implement the defaults, and may also have affected the outcomes. Thus, although some part of the observed changes in savings behavior documented by these studies may be due to the defaults, one cannot conclude that the changes completely reflect the impact of the defaults; other forces are likely at play. Stronger evidence is therefore needed to determine whether any specific default option (for example, automatic enrollment at three percent of pay investing into a money market fund) has a casual effect on behavior.

There is little evidence available on how the impacts of behavioral interventions designed to influence retirement savings vary by employee age, gender, income, or race.

Only one study reviewed by CLEAR that received a high or moderate causal evidence rating examined impacts of an intervention for these important subgroups. Duflo and Saez (2003) explored the impact of receiving information about tax-deferred retirement accounts on account enrollment using a randomized controlled trial. The study found that the informational intervention it studied led to increases in tax-deferred retirement account enrollment and that these impacts were the same for men and for women.

Some studies reviewed by CLEAR that received low causal evidence ratings explored variation in impacts of behavioral interventions across demographic or socioeconomic groups. They tended to find larger impacts on individuals who typically had lower pre-intervention savings rates, such as lower-income individuals and minorities, but results were often mixed (Madrian and Shea 2001; Choi, et al. 2006; Thrift Savings Plan 2012). And, the low causal evidence ratings these studies received suggest that caution should be taken in interpreting these results.

There is little evidence available on how the impacts of behavioral interventions designed to influence retirement affect total savings.

Individuals may respond to the interventions CLEAR reviewed by changing how they save money in the plan or account examined but not the total amount of money they save across all plans and accounts (including 401(k)s, other pensions, brokerage accounts, individual retirement accounts, and bank accounts). For example, a change in firm policy could lead an individual to invest more in a 401(k) but less in an individual retirement account. Policies to increase retirement savings may also influence the amount of debt individuals take on. For example, individuals may pay off their mortgages more slowly if they invest more money in their 401(k).

No study reviewed by CLEAR that received a high or moderate causal evidence rating examined total savings, debt, or net savings (the difference between savings and debt); rather, studies typically focused solely on 401(k) contributions or investments in a specific brokerage fund. This provides a valuable, but incomplete, picture of employees’ savings behavior.