CLEAR conducted a systematic literature search and identified, reviewed, and determined causal evidence ratings for research on interventions that use behavioral finance insights to influence individuals’ retirement savings. This brief contains the key findings of this effort. A companion brief presents three major gaps this systematic review identified in the literature.

Please see the About CLEAR section for more information on CLEAR policies and procedures.

What is behavioral finance?

In business and government, policies often are developed based on the core assumptions of economic theory: that people carefully consider all alternatives before making a decision, choose the optimal action, follow through on their intentions, and consistently respond to incentives. In the real world, however, people do not always follow these rules. The study of the gap between how people actually behave and how they are predicted to behave based on economic theory is commonly referred to as behavioral economics. When applied to topics in finance, such as investment and saving, it is referred to as behavioral finance. Many studies in behavioral finance explore how individuals’ choices about saving for retirement deviate from the behavior predicted by economic theory. Other topics include loss aversion and market bubbles.

People have relatively limited knowledge about saving for retirement and can be induced to save more when provided with additional information. 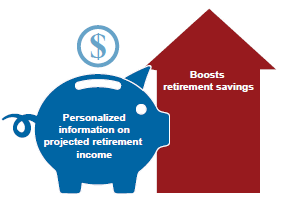 McKenzie and Liersch (2011) demonstrated that people often severely miscalculate hypothetical future savings account balances and the monthly contribution amount required to reach a specified savings goal. Evidence from lab and field experiments indicates that providing people with explicit information on the implications of their own savings behavior, the retirement account options available to them, or how savings account balances can grow leads them to report greater motivation and desire to save and increases actual savings rates (Duflo and Saez 2003; Goda et al. 2014; McKenzie and Liersch 2011). Results from one study, however, suggested that providing more nuanced information may not change behavior (Choi et al. 2011).

Making retirement more salient, by having people think of themselves in retirement or providing a target retirement date, can increase intentions to save and alter investment choices.

Hershfield et al. (2011) conducted several lab experiments in which people were presented with age-progressed or current pictures of themselves and asked to make hypothetical savings decisions. When individuals saw a picture of themselves at an older age, they allocated more of their hypothetical pay to retirement (although the differences were not statistically significant in all experiments). Benartzi et al. (2007) found that the labels attached to investment funds can sometimes change the proportion of investments that people allocate to stocks rather than to less risky investments, such as bonds. People with access to investment funds labeled with a target date for retirement (for example, 2030) invested more in stocks when younger and less when older (holding total investment constant), consistent with optimal savings behavior. However, people with access to investment funds labeled as income or growth funds to indicate how risky they were did not adjust the proportion of income held in stocks over time.

People can become overwhelmed by the number of investment options they face; when this occurs, they tend to use simple rules to make decisions.

An experiment conducted by Iyengar and Kamenica (2010) found that, as people were presented with more and more gambling options, they were more likely to choose the simplest option. Another experiment found that, when people were asked to hypothetically allocate money to different investment funds, having more funds to choose from increased the probability that a person would simply allocate the same amount of money to each fund (Morrin et al. 2012). These studies suggest that because these simple rules can lead to less careful decision making, giving people more options can lead to worse outcomes overall.